The journey – far more snow on the ground than in Irkutsk.

Hotel Ibis – smallest rooms so far – slept with window open -4C outside as rooms so warm. No tea making facilities. Old building recently renovated and they have done a good job. We were in room 440 along a long U shaped corridor. Well located and central. Just 200-250 roubles from the train station by taxi. Friendly staff – English OK to just understand. Early breakfast from 04:00 a big help when going by train on Trans Siberian. In house cafe reasonable.

Situated on the confluence of the Om and Irtysh rivers. Whilst we were here they were frozen over – very pretty – though the thaw had stated as some of the pussy- willows were just showing early buds! Some bloke in 1700’s said Omsk  was the most boring city in the world. Admittedly we would bypass it on the TS but we enjoyed it there.

Assumption Cathedral the first of the Orthodox Russian Churches with beautiful golden domes, spires and interiors 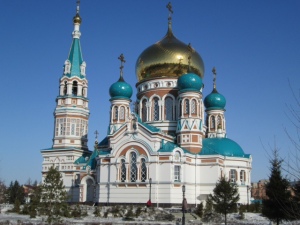 Stepan “the plumber” is a sculpture of a plumber crawling out of a manhole, dedicated to the working man in Omsk. We had just taken a photo when a smiling / laughing couple, about 47’ish, he with the usual gold teeth with gaps and her swaddled in fur coat and bonnet suddenly came up to Chris and wanted to give us a 1000 rouble note – about $30. She kept pointing to the camera, so we thought she wanted to buy it. We said no – giggling she insisted we take the money – we said no – with pantomime we asked if she was paying us to take a photo of her and hubby and email it to them. No – and she kept pointing to the camera and trying to give us the money. OK, she wants us to take a picture of them and email to them. Again no. Really insistent – pressing the money onto Chris and it was going backwards and forwards like a yo-yo. Finally, we gave up, I gave her a big hug – we all smiled, we ended up with the money and we all went on our way after about 20 minutes. Almost immediately, we went round a corner and saw a guy coming out of a drain-hole, went to take a photo as I thought the two together might be amusing and Chris grabbed the camera and said it was a bit rude. Suddenly she burst out laughing. She keeps a third emergency stash of 1000 roubles in the camera case. It was missing. How hard that couple worked to give us out own money when they must have seen it drop from the camera case!

We generally use Trip Advisor, City Walks and Maps With Me to list places we want to see in our travels. Hotels often add to the list of crosses. We visited a boutique museum dedicated to WW11 which was well worth a visit if a little small 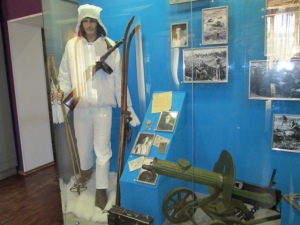 and also the old fortress which OMSK is in the process of restoring. Omsk was really cold – after about 10:00 we would venture out – maybe +2 C – the snow and ice starts melting by then but it is a little warmer so there are streams,  cascades  rivulets of water, even. After about 17:00 the temperature drops and it all ices over again. Still light at 20:30 so still lots of walking time. Restaurants/Cafes a challenge as no pictures and no English on menu still. (Perhaps our hospitality industry should learn a lesson here). Had great steak and pasta meals at “The Irish Pub”. With three pints all for about $38. On the last day we again walked for miles – Chris really crabby – finally saw an attractive looking Cafe beside the last cross on the map. Went in for a squizzy, up a long flight and – behold a magnificent bar / cafe / restaurant with loggia and the sun (?) beaming through. Fantastic, as was the very helpful waitress. In most cities we have been to on our travels, pleasant greeting with a smile, a machine gun spate of words – a look of abject horror as they realise your English or often German (or if you are lucky Australians) – they then disappear and out comes the linguist – some absolutely fluent some with the accent of their tutor and some as good at miming as we have become:). Suitably fortified – a return to marital bliss and asked the waitress how we get to the last cross which must be very near here. Puzzled look, apologies “I no very good with maps”,   scratching of head and “I think you here”. Then it dawned on Chris – this was the place you would “Bring your ageing parents to for a really good night out, entertainment, booze and good grub” as recommended by staff at Hotel Ibis on Day 1. We had forgotten.

03:30 at the station for the train to Yekaterinburg at the base of the Ural Mountains where the Tsar and all his family were murdered.

Sipping whiskey and coke and just had a great meal of cabbage soup with bread, beef and pasta – included with train fare. Great train – great view out the window (just the two of us in our cabin) with the usual landscape of snow-covered silver birch, the occasional oat crops ready for harvesting (?) and inevitable small stops. It appears we may not have booked enough time in Yekaterinburg as there is a lot to do. Booked the 200 kmph train from Moscow to St Petersburg for the 12th. Booked 5 days in St Petersburg then fly to Heathrow on the 17th arriving early evening.