Train from Ulan Bator – (spelling change from Mongolian to Russian)

Immaculate loos, cabin all to ourselves – no restaurant car – AT ALL. Usual 3 hrs at the border with officious Mongolians followed by officious and very thorough Russians – cool but pleasant.

Met up with Tracey again – she sharing with three others and going through to Moscow and will KIT.  Price we paid for “first class” way overpriced compared with her “second class” ticket. Hardly any difference. Admittedly we are making 4 stops compared with her one but the romance of the Internet in no way compares with reality of the trains involved – be interesting to see what the Rossija (the train) is like from Irkutsk to Omsk, a two nighter. For those considering making this journey, there is no restaurant car on the K5 all the way from UB to Moscow. So what you eat is what you bring on or buy on the way. Spicy noodles for about $1 are the favourite. They do have gazetted stops which you can see on the carriage wall. We leapt of at a 20 minute stop last night and bought chocolate and two $1 burgers – Yummy. Chris not too pressed wit them so I finished them, I’m just a dustbin. The border stops took nearly three hours – again with much clanking and banging from the train. Interestingly there are many UB “traders” on the train. They come loaded up with gear to sell to the Russians. Before the border, they all seem to be doing a wonderful trade with each other. After the border the all seemed to “trade” their goods back. Presumably  so they don’t look like traders. Guess it’s a game they play. Trust me, border immigration in Russia is pretty thorough so they would know what’s going on:)

Once crossing the mountains onto the Irkutsk side  we see the land covered in snow and snow drifts and silver birch trees – obviously higher rain / snowfall on this side. We spent hours circumnavigating Lake Baikal which is huge (650 kms long and 50km wide – the size of Belgium)  – totally frozen – covered in snow – and with three or four people ice fishing by their 4wd /snowmobiles and the occasional vehicle stranded to their rooftops in snowdrifts. 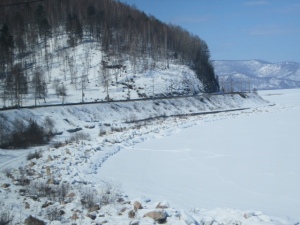 For the first time conifers appeared on the hillside beautifully covered in snow. Also many pine homes also snow covered with huge icicles hanging from the rooftops. Also gaily painted cottages by the side of the rail-road very pretty. Ahhh. Just left Slyudyanka – right at the northern end of Lake B. Looks like a major railway workshop for this end of the Trans-Siberian. Stopped for less than 7 minutes. The train emptied in seconds- Russians running down the overpass to get to the traders – frenetic buying with money appearing and disappearing in the twinkle of an eye. Smoked fish and meat, jeans, handbags, scarves you name. Lots of happy faces as they all leapt back onto the train. Serge and Alexis and friend (power generation engineers working in UB) invited me into their cabin for a beer and some smoked fish. Luuuv smoked fish. They fish (omulyuk) and hunt rabbits, hares (5kg) and duck – summer and winter. Showed me some fantastic photos of places they go to in Siberia and will send some on to us.

Clean air (dust kept down by ice and snow – dusty when thawed probably), crisp with blue skies. Modern attractive buildings –  wooden and complex from 1920’s – 1880 bricks gaily painted – solid and interesting. Suspect be quite dusty again when the ice melts.

Staying at Hotel Sayen on Karl Marx Street (both lovely). Hotel Sayen was designed by a Japanese architect and no expense was spared on the bath fittings complete with sub marble floor heating and an electronically controlled loo which flushes you, blow dries you, etc. Room 51 is a corner room with a balcony – electrically opening curtains and our first truly king sized bed for a while. Even received an anniversary gift – wonderful.

Starving, so went out.  We walked straight over the road into the German Bier Haus. We walked down into an underground bunker with side rooms – all the girls in costumes and no English – AT ALL. Just an amused smile. 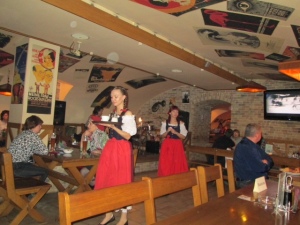 Great ambiance with low lights and musicians playing. Chris yelps with delight – Fillet steak on the menu – I’m happy as sauerkraut and sausages also there. Unfortunately nothing in English so took a stab at the top of the list. What we got. Two steaks about 30 x 100 mm. TWO, with ONE cherry tomato – that was it. How do we know you have to order side vegies? I received five different types of sausages – two of each, with red cabbage and sauerkraut. It was lovely but wish we could have found three other friends to share it tall  with:) Now we no what the Mona Lisa was smiling about – they ordered too much food! 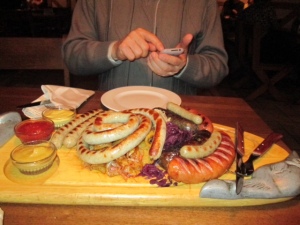 It’s the Iditarod – crouching low over dog sledge, fiercely gripping the handrail, the dogs are baying and you’re two meters behind the lead team. Swerving wildly round the bend, in amongst the snow covered silver birch trees the sled runners are screaming round the final curve, ice chips flying everywhere – leaning over at an impossible angle trying to take the bend without overturning, – you race to the finishing line….Who won? Who cares?  All over for another year. 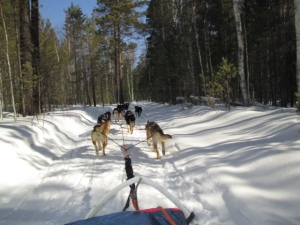 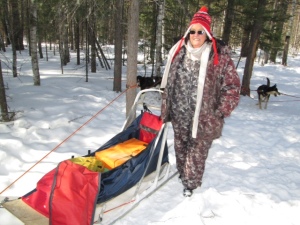 Dog-sledding at Listvyanka near the mouth of Lake Baikal is an absolute must for your bucket list if you can manage a stop on the Trans-Siberian. It isn’t quite like the Iditarod of course but Leonid and his team drive to the capability of the customers. My wife and I (66 and 63) both drove the sledges with the guides sitting. So I fell off twice – good fun – you’re in snow. Contact: Leonid Batorov – BAIKAL EXPLORER – www.baikalex.com – info@baikalex.com +7 3952 742440 Leonid speaks excellent English and provides a knowledgeable and entertaining discourse on the 70 km drive. Season ends in April. Don’t miss a couple of hours of sheer fun. Ozdreamer (That’s me)

We finished with a tour of Listvyanka Village with all the locals buying smoked fish, rugged up in BBQ shelters and generally frolicking with the family on the ice. 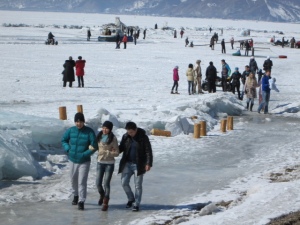 Tonight have bottle of Vodka, bottle of gifted champagne and ready to hit the town. Nothing happened of interest and off to Omsk for a couple of days tomorrow.

Hotel Sayen has a 7th floor glass restaurant with a lovely aspect and impeccably laid out, but find it rather strange that a cooked breakfast is pre-ordered for a set time. On entry the cereals are already there as are the fried eggs and toast – by the time you get them, they are cold – odd.