So our luxury limo arrived on cue and took us to Perth International for our First Class flight to Dubai. Fascinating Indian driver from the Punjab, in the south of India near the Pakistani border. For those who don’t know, Pakistan was created during what they called ‘Partition’, with the mainly Muslim south becoming Pakistan and separating from the north, mainly Sikhs and Hindus which remained India. Most from the north thought it was just politicians going mad and that it would be temporary! Many families, land, wealth and other assets were split during partition turning family against family! Moving on, the combined First and Business class lounge had Veuve champagne together with generous crayfish salad. Yum. The A380 is MASSIVE. Economy front to back on the lower deck with 75 or so Business class pods on the upper deck and about 20 First class mega pods in front of them, going almost to the pilot cabin. There are THREE windows in each pod. A large tv in front. Watch movies or, as I do, track the plane. Pop up complementary mini bar, a basket of goodies with chocs, some cleverly hidden freshener creams. The food is gorgeous, A-La-Carte and you can order any time on the whole flight unto you are totally stuffed. Ditto the drink. Sadly, with a 22:00 flight a few farewell drinks, feeling very tired, we didn’t do it justice. One glass of Bollinger each at the main cocktail bar. After the fully reclining bed has been made up, with the complimentary pyjamas and slippers, tea and chocolates – off for a snooze. There are double sliding doors to each pod. Couldn’t quite work out how to close them when leaving the pod, so close, close, close and yanked hand back from the controls at the last minute. Thought that was quite innovative. When I got back the flight attendant was trying to work out how to open it from the outside. Thought she might climb over the top in her mini-skirt😎 – in the dog house again! During the usual trips to the loo, you pass a mini cocktail cabinet with some really top shelf whiskers, brandies, liqueurs etc. Mmm  … will try that later. At 03:00, feeling refreshed – lets hit that little bar. Vanished. Now becomes a waterfall ready for all those who would like a spa. Bugger. Time for a shower. There are two huge shower/ bathrooms with complimentary everything, except funnily make-up remover. The shower is really something and very refreshing – I can almost see you all giving a casual flick of the hair over the left ear – bless old Jennifer! Breakfast, a huge choice again so had Thai prawn and crayfish salad and real coffee. Before we knew it we had landed at dawn, a chauffeur picked us up and took us for a complimentary 8 hour stay at La Meridian hotel – with, you guessed it, another complementary breakfast. What can you do? We thought we would take a taxi tour of the city but decided to wait till next time. Chauffeur again back to the airport as we waddle around the airport at Dubai in the Business lounge waiting for our Business flight to Istanbul. Sometimes, you just have to slum it. First Class airline travel – with shower – another thing off our bucket list! 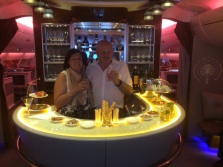